Online Lecture: Walking with Su Dongpo, The Legendary Poet of the Song Dynasty 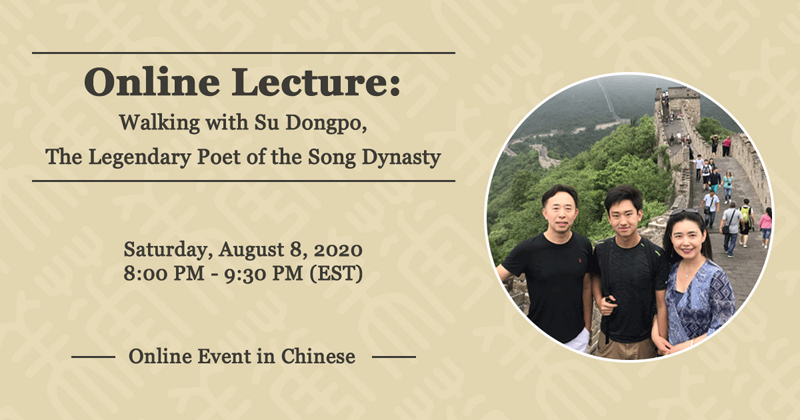 Su Dongpo was a poet, essayist, calligrapher, and public official in the Northern Song Dynasty. A member of a literary family, Su performed brilliantly in the civil service examinations and was rewarded with the first of the many official positions he occupied during his long and distinguished career. Su was a master of nearly all literary forms, including shi (regulated verse), the ci (song form), fu (prose poetry), and essays, as well as calligraphy and painting.

Su Dongpo lived at a time of political turmoil. He himself was subject to political exile but kept to his Daoist beliefs to accept things as they were. Although he lived a topsy-turvy life, he produced his best works during his most downtrodden times. His literary works, many of which depicted his own experiences, typically emanated a characteristic optimism toward life, leaving us with words worthy of remembering many centuries later.

The speaker Dr. Zhu Qi is a longtime admirer of Su Shi. He will take the audience on a journey with Su Dongpo from his political heights to downturns across China to enjoy his poetic witticism, and appreciate the philosophy of Zen behind his works.

A renowned scholar and writer, Dr. Zhu Qi received his Ph.D. in Chinese literature from Peking University and taught at UC Berkeley and Stanford University. He has given hundreds of public lectures on the West Coast and enjoys a great reputation as an engaging public speaker.

Free, but advanced registration is requested.